Port of Port of Spain, Trinidad and TobagoRoyal Portbury Dock

The River Wear and city of Sunderland has a long and proud maritime history centring around shipbuilding and coal exports. Ship and boat building on the River Wear can be traced back over 2,000 years, with over 400 registered shipyards operating in Sunderland throughout the centuries. At the peak of shipbuilding on Wearside, the Lloyds Register of Shipping recorded that it was “the most important shipbuilding centre in the country, nearly equalling as regards tonnage and ships built as all the other ports put together”. An incredible 27% of naval and merchant ships produced in Britain during the Second World War were built in Sunderland. Throughout the 19th & 20th centuries Sunderland was widely regarded as the largest shipbuilding town in the world.

Sunderland’s history as a Port can be traced to Roman times and as early as the 1590’s Sunderland was known to be exporting coal. The Sunderland South Docks, the current site of the Port of Sunderland, was constructed in in 1848 to serve as the main port of export for the Durham coalfield. Despite the deindustrialisation on Wearside, the massive structural and strategic change to Merchant Shipping in the wake of containerisation and shipments from the Durham Coalfield had all but disappeared, the Port of Sunderland has diversified and grown to become the second largest municipally owned port in the United Kingdom.

Adapting to the 21st century, the Port of Sunderland is continually striving to reshape its influence on the North East’s economy with a major re-growth programme. The port plays a major role in supporting the offshore and renewable energy sector, as well as providing comprehensive port operations services and has the ability to handle and store any type of commodity. Continuous significant investment in equipment and heavy lift cranage has improved the Port of Sunderland’s capabilities in these areas.

With the delivery of modern sate of the art equipment, many of the ports traditional cargo handling dockside cranes had become surplus to operational requirements, therefore the decision was taken to dispose of three of these ageing cranes to free up valuable quayside space. O’Brien Specialist Crane Services were appointed by the Port of Sunderland to carry out the works due to their outstanding global reputation as the authority in the crane disposal industry.

The three dockside cranes were positioned across two locations of the 250 acres port, two of which were located on the Port’s main deep-water berth, Corporation Quay. Despite the large size of the Port of Sunderland estate, working area on Corporation Quay was at a premium due to it’s narrow width and intensive vessel discharge operations. The Port of Sunderland identified the only possible location for the disposal works as a small area towards the west end of Corporation Quay. It was also a requirement of the client that the 600 ton, 60 meter tall cranes were removed in the shortest possible time frame, to ensure minimum disruption to critical quayside operations. 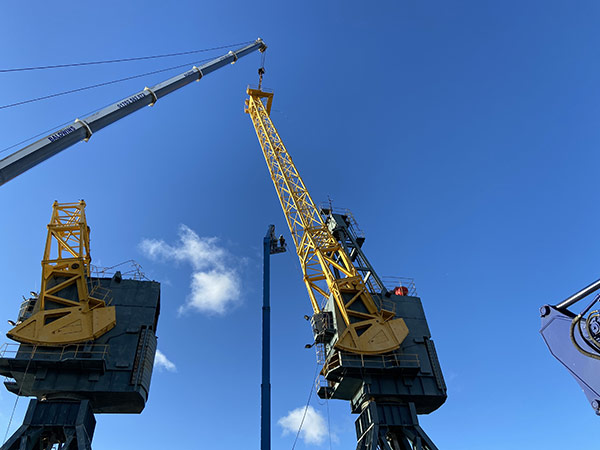 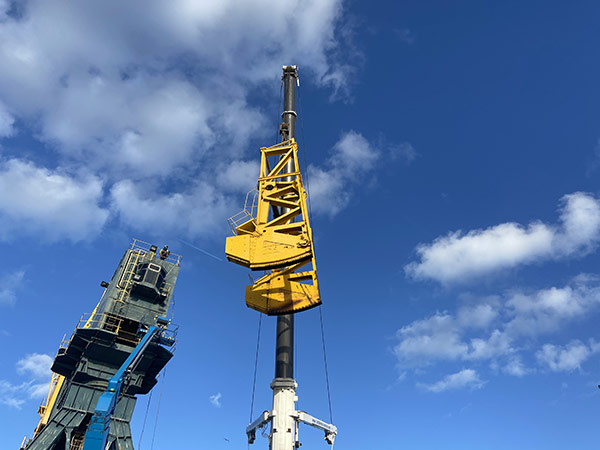 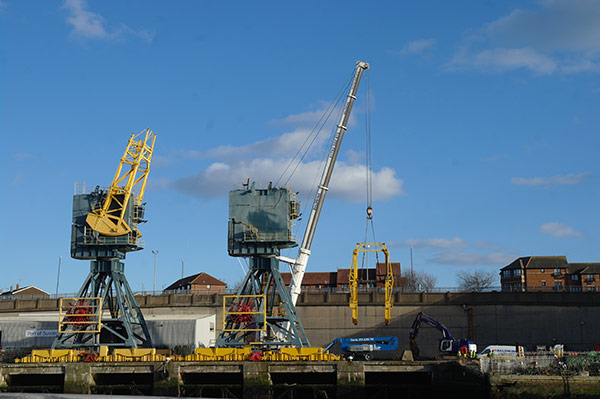 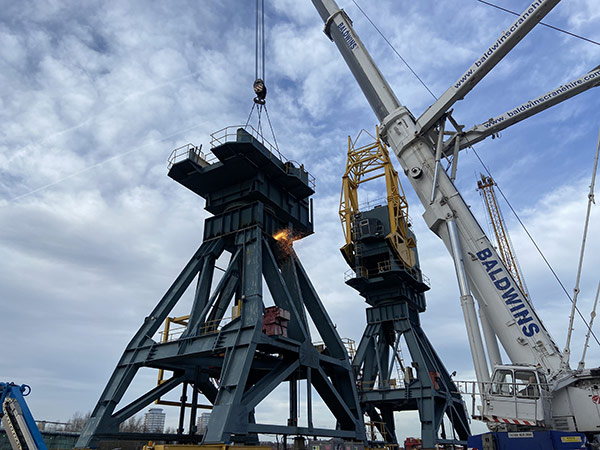 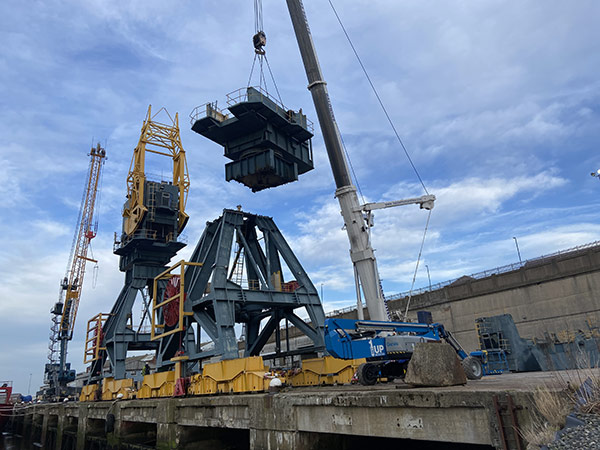 Following the initial site survey carried out by the O’Brien Specialist Crane Services engineering team, it was clear that a controlled collapse method was not possible as a result of the limited size of the work area available. This led the engineers to develop a disposal method centring around a traditional piecemeal dismantling operation. This presented additional challenges to the engineers as the quay was of a vintage suspended type structure, meaning available ground bearing capacity was severely limited.

Working with the client and their third-party civil engineer, O’Brien SCS were able to review the limited quay deck design information to determine a suitable position for rigging of a heavy lift mobile crane capable of lifting the required sections from the dockside cranes which weighed in excess of 100ton. An outrigger load spreading system was also designed and implemented to ensure that ground loadings were well within acceptable limits.

The O’Brien Specialist Crane Services engineering team then proceeded to develop a dismantling procedure which would allow the cranes to be dismantled in the shortest possible time frame, whilst ensuring structural stability of the cranes throughout the works. The team then consolidated all elements of the feasibility study into a detailed proposal which greatly exceeded the demands and expectations of the clients, with O’Brien SCS proposing a total duration of only 6 weeks to the delight of the Port of Sunderland. 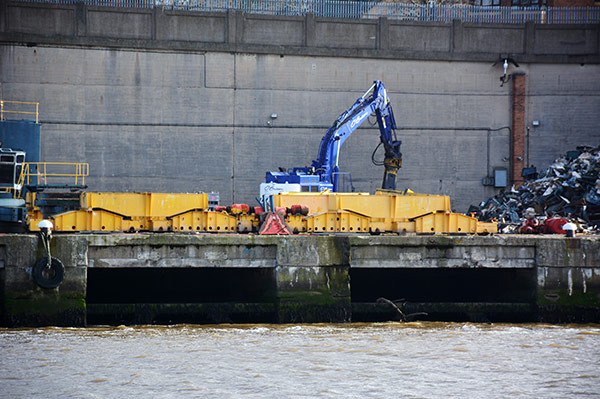 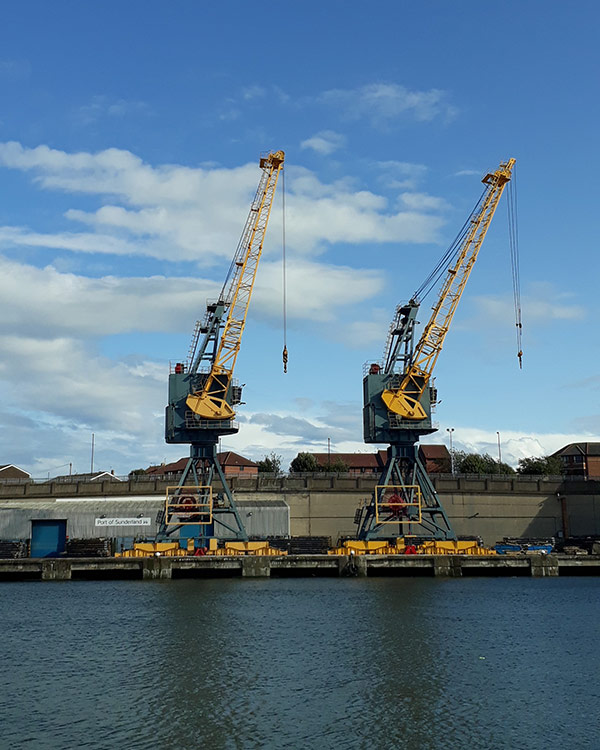 In spite of unprecedented continuous extreme weather conditions resulting from three consecutive named storms, the O’Brien SCS site team were able to complete the dismantling of the three dockside cranes in a total duration of 6 working days, a staggering achievement. The project was completed within 5 weeks, to the wonderment of the Port of Sunderland as the working areas were handed over 1 week ahead of schedule.
The O’Brien SCS team carried out all aspects of this project inhouse including;

The project featured many risks including working at heights, complex lifting operations, operation of heavy plant, working in a live port, and working over/near water. However, the project was seamlessly completed to the total satisfaction of the Port of Sunderland and other key stakeholders, with zero health, safety, or environmental incidents, whilst achieving an incredible recycling rate of 99.8%.