The City of Bristol was built on shipping and the roots of the modern Bristol Port Company go back to the 1870s. A constant theme in the development of maritime logistics is the evolution in the types of cargos being shipped to meet the ever-changing demands of the nation. Ports need to keep pace with this development and the Port of Bristol is no exception. Bristol Port is a key national asset, continually investing to maintain its position as a critical link in the supply chain.

In the early 1990s the Bristol Port Company invested £120million to develop a modern and efficient coal handling and distribution facility. The new coal terminal had the capacity to handle some 12 million tonnes of coal per year, this was thanks to the state-of-the-art equipment which included Europe’s longest coal conveyor belt, a 600,000ton capacity stockyard and two 2,500ton rapid loading bunkers capable of loading 1,750ton onto awaiting trains in under 36 minutes.

At the very heart of the entire coal terminal were the two vitally important Kone Continuous Ship Unloaders (CSUs), each with the means to discharge 2,000ton of coal per hour from vessels as large as 130,000te deadweight. The use of these vast CSUs machines ensures total efficiently and the minimum risk of dust and spillage during vessel unloading allowing the terminal to maintain heigh levels of environmental standards.

As the UK turns to renewable energy sources to power homes and industry, the demand for coal imports has dramatically reduced over the past decade with net imports down 91% from its 2013 peak. In 2018 the Bristol Port Company completely stopped all imports of coal opting to diversify into new markets. This had left the once world-renowned import terminal surplus to operational requirements, so in 2021 the decision was taken to dispose of CSU1 to make way for the delivery of new equipment to handle the next generation of cargo.

It was obvious to the Bristol Port Company from the very outset, that the disposal of CSU1 was not a typical disposal project and would pose significant engineering challenges which would have to be overcome. As one of the few contractors in the world with the capabilities to execute such a complex dismantling project, O’Brien Specialist Crane Services were commissioned to develop a detailed technical proposal for the safe and efficient disposal of the machine.

The first task undertaken by the O’Brien SCS engineers, was to carry out a robust review of the limited available as built information for the CSU, followed by an extensive onsite structural survey to obtain all information required to develop a dismantling methodology. The engineers quickly realised that there was a discrepancy between the stated mass of the CSU’s raised counterweight and its actual volume. This led to further investigation which revealed, after extensive testing, that the counterweight material was a MagnaDense mix and not standard concrete as previously advised. MagnaDense mix counterweight has double the density of standard concrete which explained the discrepancy and how the weight of the raised ballast box was some 500ton.

From the now extensive information available, the engineers set about devising a safe method for the disposal of the CSU machine. It was immediately evident that a controlled collapse or explosive demolition technique could not be utilised, as directly landside of the CSU was a double conveyor gantry which could not be disrupted under any circumstances.

The O’Brien SCS engineers then investigated the traditional method of piecemeal dismantling using heavy lift cranes; however, the raised luffing boom structure was of a cantilever design, supported at only one single pivoted point about which it was able to freely rotate. This was then connected to the raised ballast box via an A-frame tower and bracing members, which ensured the raised structures was perfectly balanced. This meant that removing any sections from the CSU boom or counterweight would lead to imbalance and instability. Also, the removal of the A-frame or any bracing members would lead to an uncontrolled collapse as the structure would no longer be self-supporting. In addition to these challenges, it was apparent that lifting the entire 500te in-situ poured MagnaDense counterweight was not practical or financially viable. 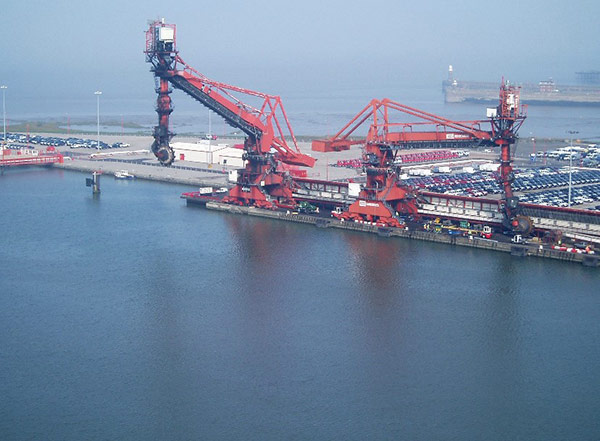 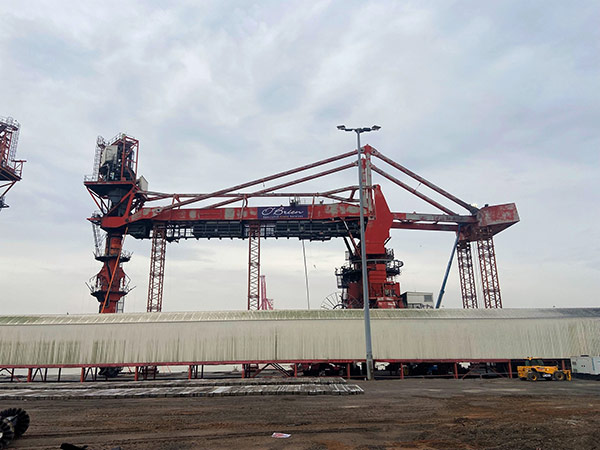 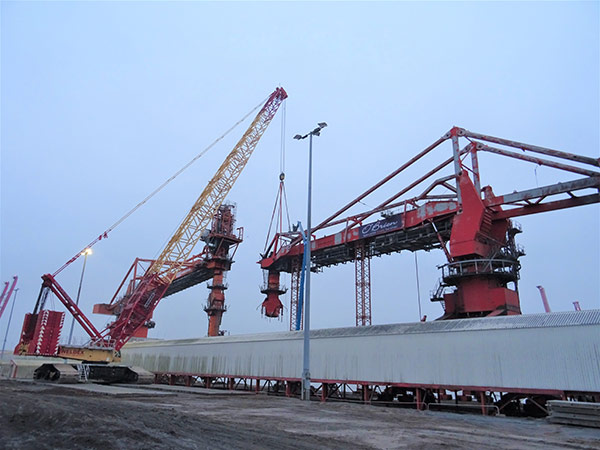 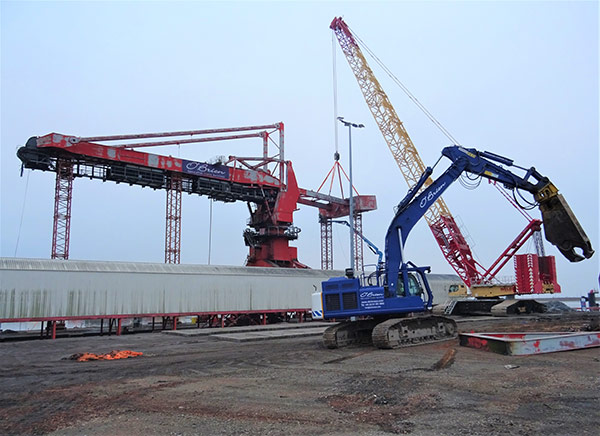 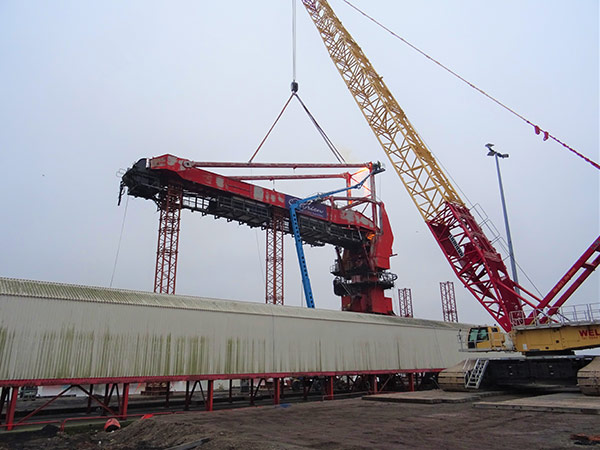 The O’Brien SCS team called upon its vast experience to come up with an unprecedented solution to allow for the safe dismantling of the CUS machine. The unique method used O’Brien SCS owned and engineered support towers, to independently support the boom and counterweight structures from ground level. In total four support towers were used and secured at strategic locations below the cantilever structures, each supporting weights of up to 280ton. This method allowed for the removal of components from the CSU, in a predetermined sequence, including the A-frame and bracing without any risk of unbalance, instability, or uncontrolled collapse.

The team then developed a method to remove the in situ poured MagnaDense counterweight eliminating the need and associated cost of lifting the entire 500ton section. A remote-controlled demolition excavator with breaker attachment was employed to break out the MagnaDense material and remove it from the 36m hight counterweight box.

Finally, the team were able to establish the actual dismantling sequence and lifting plans taking into consideration the site constraints. Due to limited working space and extremely low ground bearing capacity of the quayside area, it was not possible to operate heavy lift cranes in this area. The only option available was to locate the dismantling crane on an area of made-up ground landside of the CSU and behind the conveyor gantries. Unfortunately, this significantly increased the operational radius and therefore required a larger capacity crane, with the selected crane being an R1750 crawler. A crane pad was then designed and installed by the O’Brien SCS in-house civil engineering team which provided a safe operational area on which the LR1750 could work. 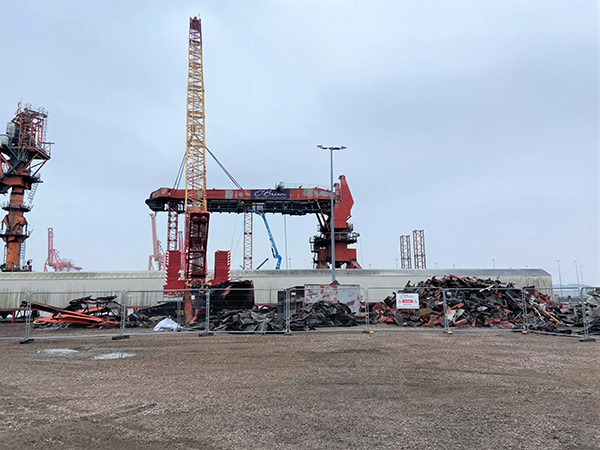 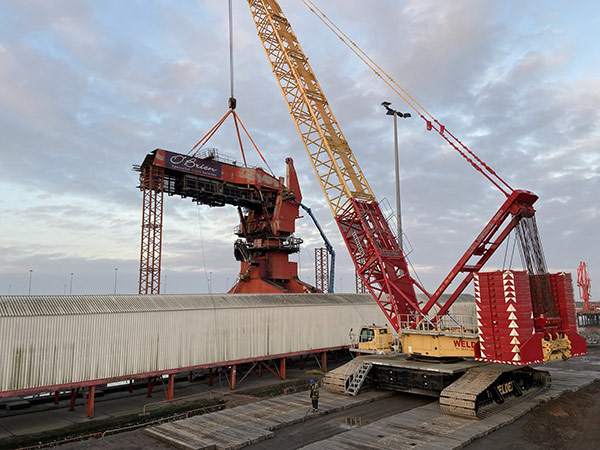 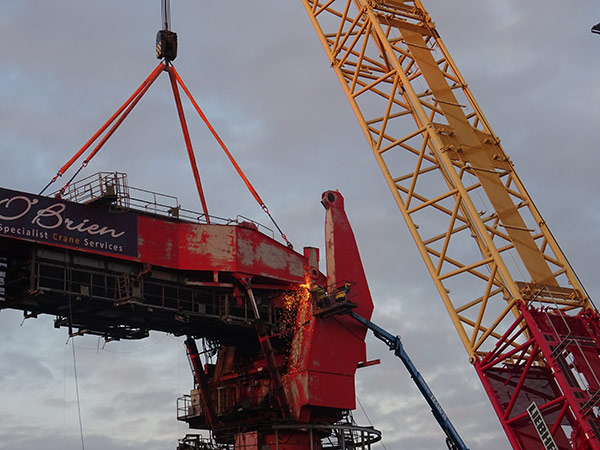 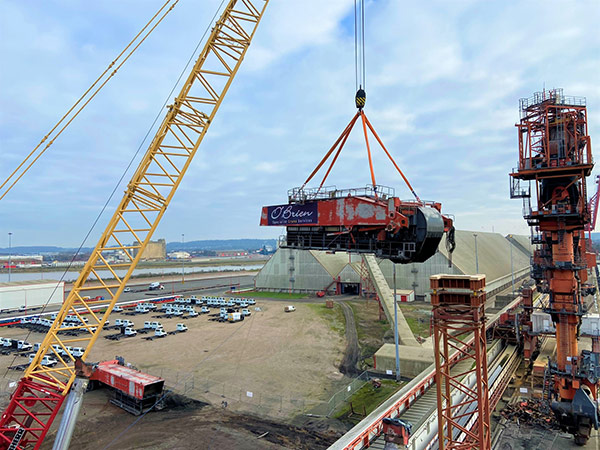 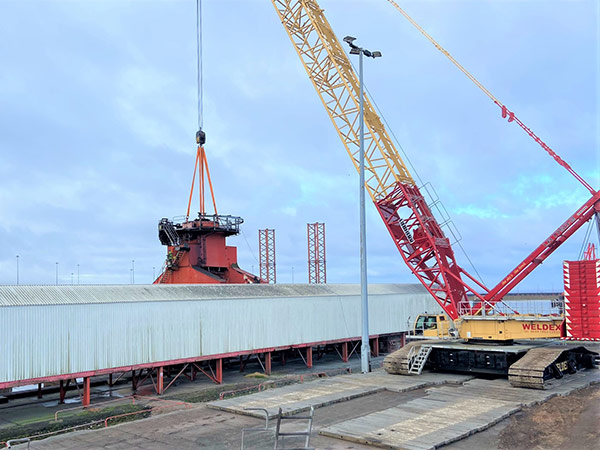 Despite the works taking place during the depths of winter, the O’Brien SCS site team were able to deliver the project on time, with the actual piecemeal dismantling of 1,300te structure being complete in a staggering 5 days to the wonderment of the Bristol Port Company.

The O’Brien SCS team carried out all aspects of this project in-house including;

The project featured many risks including working at heights, complex lifting operation, operation of heavy plant, working in a live port, and working over/near water. However, the project was seamlessly completed to the total satisfaction of the Bristol Port Company and other key stakeholders, with zero health, safety, or environmental incidents.