Mechanical and Electrical Assembly of New Ship to Shore Cranes

Trinidad and Tobago is often considered the manufacturing centre for the Caribbean, and the country is also known to be a large transhipment sub-hub for containerized cargo. Not surprisingly, the maritime sector is one of the nation’s main industries. The PPOS container terminal is ideally positioned to service the major sea lanes between the Americas, the islands of the Caribbean and the trading links between the Atlantic and Pacific Oceans via the Panama Canal. The local population also rely heavily on the PPOS Container Terminal operations for the import of vital goods such as food and pharmaceuticals consumed on the island.

As a vital part of the national supply chain, it is imperative that the Port Authority of Trinidad and Tobago has the latest, most efficient and, most importantly, the most reliable equipment available. This being the reason PATT continues to heavily invest in the development of its PPOS container terminal. When the oldest of its STS cranes was nearing the end of its life cycle, PATT began the process of procuring its replacement, with the new crane set to be the mainstay for PPOS terminal for generations to come.

After extensive evaluation, the Port Authority of Trinidad and Tobago (PATT) awarded the contract for the supply of the new STS crane to Killarney based Liebherr Container Cranes. Ship to shore container cranes (STS) from Liebherr achieve up to 99.6% availability during actual vessel operation, making them perfectly suited for PPOS requirements. Liebherr STS cranes are unique in the marketplace as the cranes are shipped to the port in component parts and then assembled onsite, this greatly reduces the unnecessary risks associated with fully erect sea transport.

Following a competitive and robust tender process, O’Brien Specialist Crane Services were appointed by Liebherr Container Cranes to undertake the role as Principal Contractor for the mechanical and electrical assembly of the new Super Post Panamax STS Crane, providing all engineering plans, equipment and labour required. 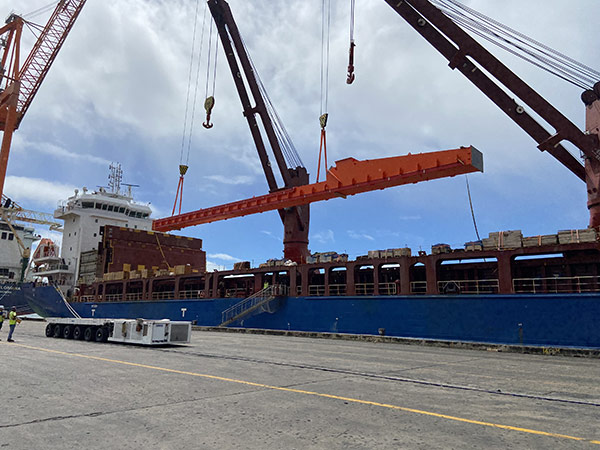 Although the method of assembly for LCC STS cranes is tried and tested, nothing was left to chance by the O’Brien SCS team, and the particular PATT project presented a number of uncommon challenges. The first challenge faced by both O’Brien SCS and Liebherr was the travel restrictions imposed by the Trinidad and Tobago government which saw the complete indefinite closure of international borders amidst the worsening COVID-19 pandemic. Considerable effort was given by the O’Brien SCS and LCC contract management teams to determine a solution which would allow the specialist workforce to entre Trinidad to carry out the works. Many conversations and negations were held between all parties which include the Ministry of National Security, which resulted in the O’Brien SCS team being granted an unprecedented exemption to enter Trinidad and Tobago, despite the ongoing restrictions. In spite of the overwhelming success, the obtaining of an entry exemption did not overcome the entire travel restriction issue. As the borders remained strictly closed, there was no civilian flights into Trinidad, therefore O’Brien SCS worked closely with the Caribbean Airlines to charter a flight solely for the assembly team. Once in Trinidad the assembly team underwent 14 days isolation under government supervision, along with regular PCR tests.

The next challenge to face the assembly team was the supply of equipment to execute the works. While Trinidad is an industrial nation, the heavy equipment required for the assembly of an STS crane is in limited supply, and in some cases non-existent. After investigating what was readily available, the O’Brien SCS engineers set about modifying the traditional assembly process to enable it to be carried out in an efficient way with the equipment available. 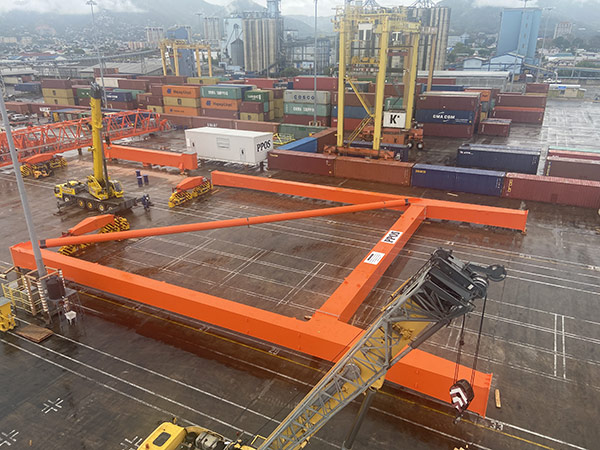 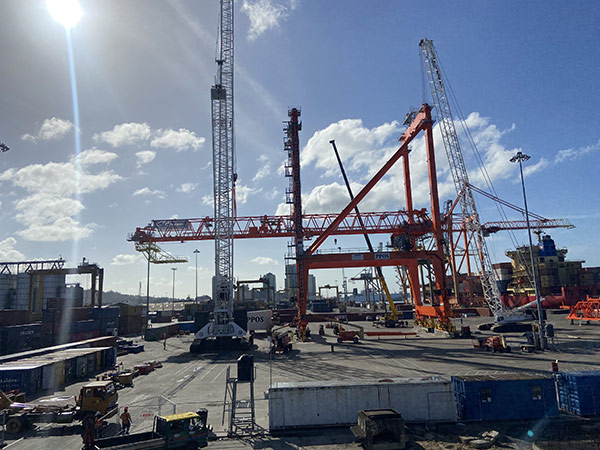 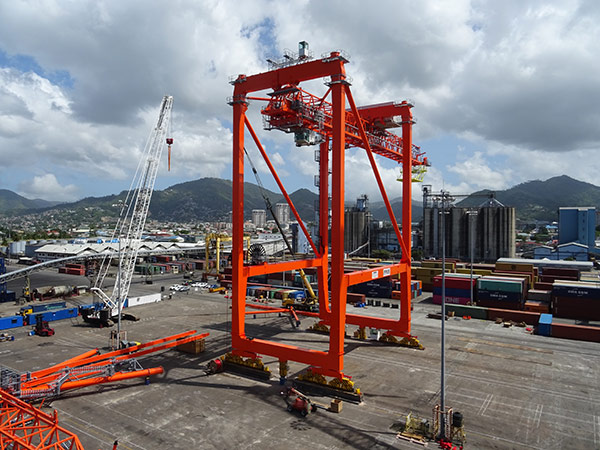 To limit disruption to PPOS terminal operations, the STS crane was assembled in a remote area away from critical quayside operations, which meant the fully assembled STS crane would need to be transferred to the quayside crane rails using Self-Propelled Modular Transporters (SPMT). Unfortunately, only 24 of the required 48 axle lines of SPMT’s were available anywhere within Trinidad. Moreover, the required span/transport beams required to support the STS crane during the transfer were also not available locally. Working with strategic partners O’Brien SCS imported the remaining SPMT axels from the USA. However, due to the physical size of the required transport beams, shipping these from overseas was not a viable option. The solution developed by the O’Brien SCS team was to design, engineer and fabricate a transport beam onsite for the transfer operation.

Despite the many challenges, the importation and onsite manufacturing of equipment, the O’Brien SCS team managed to complete the electrical and mechanical assembly of the 330foot, 900ton structure ahead of schedule and in record time, a remarkable accomplishment. Both Liebherr Container Cranes and the Port Authority of Trinidad and Tobago were thrilled by the drive, dedication and work ethic demonstrated by the entire assembly team to overcome adversity during the testing global pandemic.

The O’Brien SCS team carried out all aspects of the assembly project including;

The project featured many risks including working at heights, complex lifting operations, operation of heavy plant, working in a live port, and working over/near water. However, the project was seamlessly completed to the total satisfaction of Port Authority of Trinidad & Tobago, Liebherr Container Cranes, and other key stakeholders, with zero health, safety or environmental incidents. 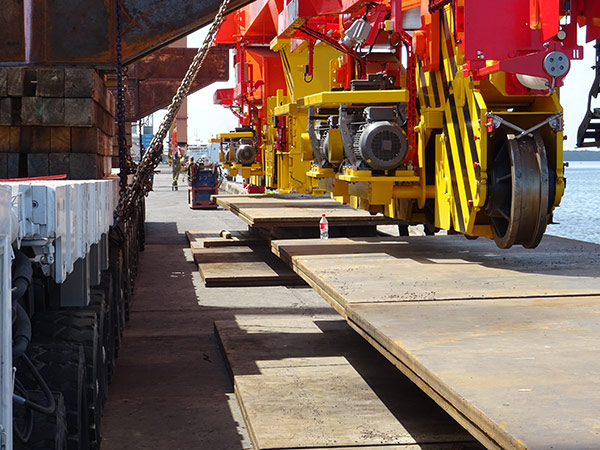 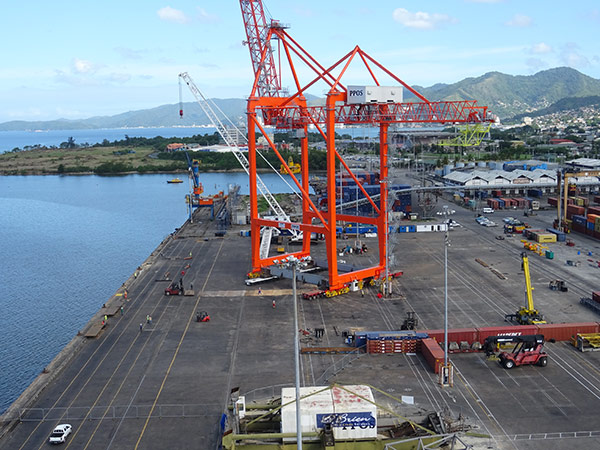 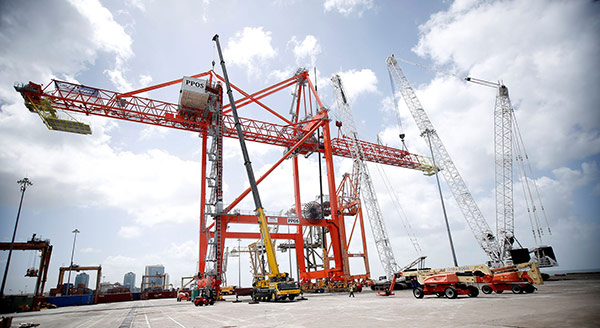 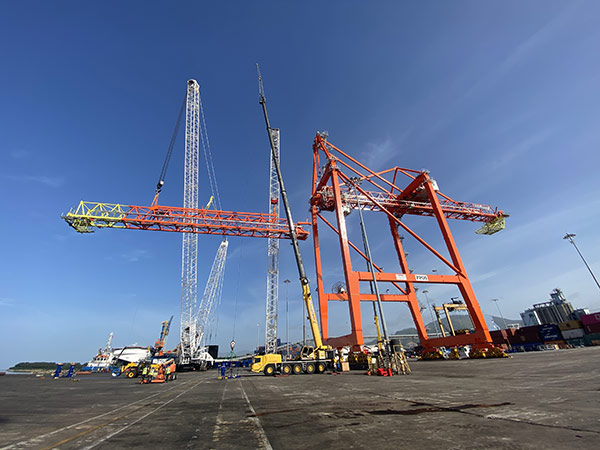 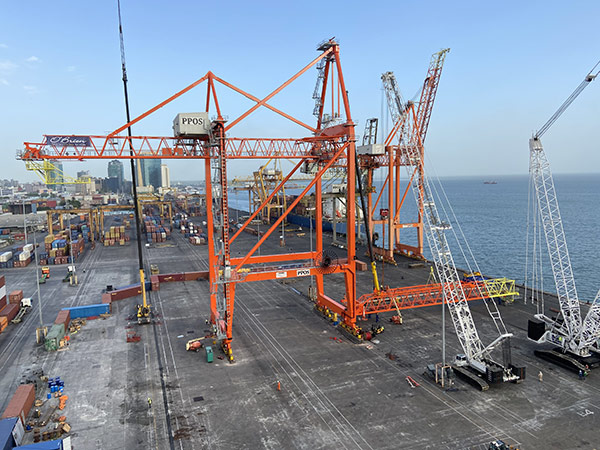 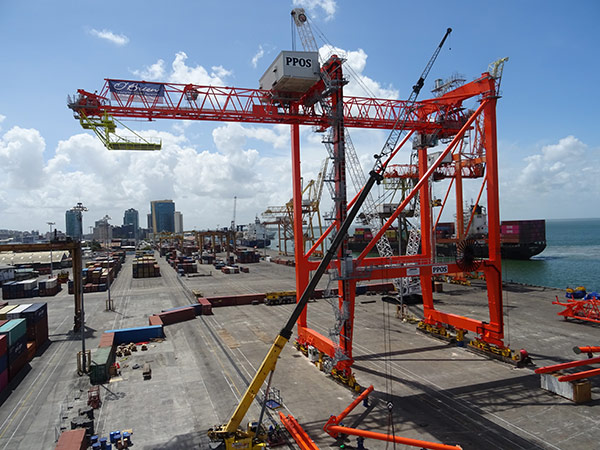