Relocation and Disposal of a Ship to Shore Crane – ABP Immingham

The Associated British Ports, Port of Immingham is the UK’s largest port by tonnage, handling around 46 million tonnes of cargo every year. With a total acreage of 1,230 acres the Port of Immingham is capable of dealing with a wide range of cargo, including Ro-Ro, containers, dry bulks and liquid bulks, which makes it a critical link in the supply chains of businesses throughout Britain, contributing over £700 million to the economy each year.

To future proof the Immingham Container Terminal (ICT) and extend its footprint, Associated British Ports launched “Project Pilgrim”. Project Pilgrim is a £33 million upgrade which will increase the space, improve the layout and add new equipment, including the new state of the art purpose-built cranes. To make way for the arrival of the new cranes the terminals oldest STS, C2, was to be removed. 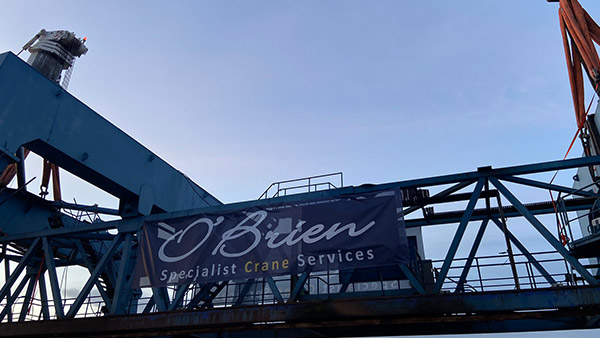 O’Brien Specialist Crane Services were engaged by the ABP Project Pilgrim management team and were set the challenge of developing a proposal for the safe and efficient disposal of crane C2. The key project requirements were;

Although the individual project requirements seemed simple, achieving these would pose a number of engineering and logistical challenges to the O’Brien Specialist Crane Services team.

It quickly became evident during the initial site survey that demolishing or dismantling crane C2 in its current location would not be possible. This was due to the existing layout of the container terminal which required all container traffic to pass directly below crane C2 as they travelled from vessel to stacking area and vice versa, with no possible diversion routes. In addition, directly behind crane C2 and in almost touching distance was the Inter Terminals bulk liquid storage facility. 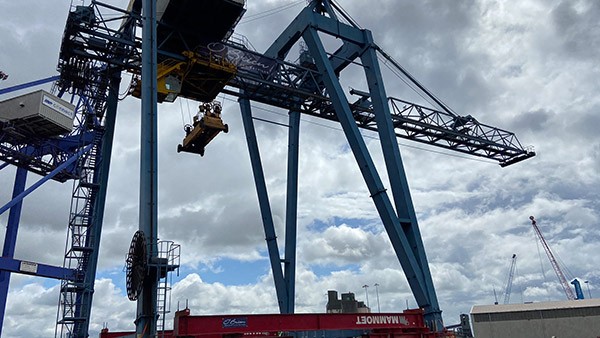 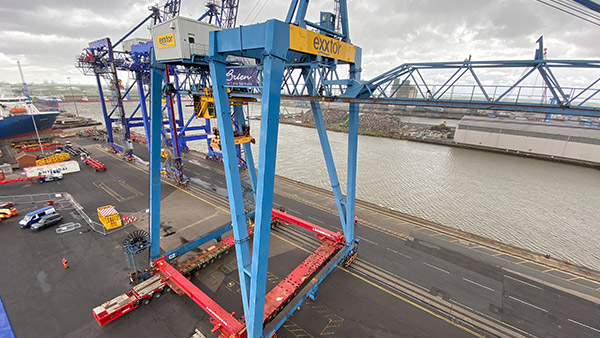 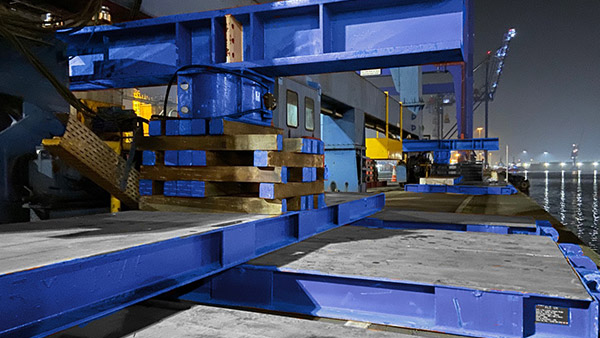 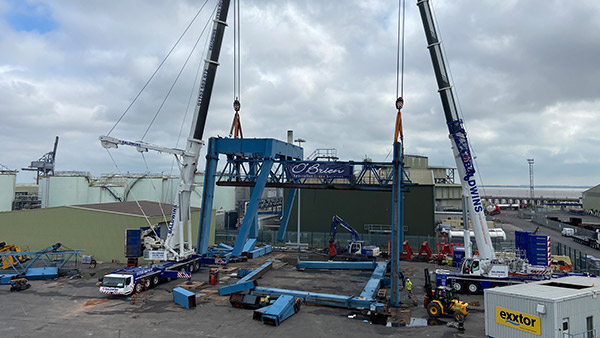 The only solution was to relocated STS C2 to another location to carry out the disposal works, however, due to the intense operational activity within the port estate an ideal remote location was not available. Associated British Ports identified three possible locations in which the works could take place, however all of these were within valuable operational areas, so as a result the size and duration of use was considerably limited. O’Brien Specialist Crane Services developed feasibility studies for each of the three locations to determine the most suitable area of the relocation and disposal works. These studies took into account the size and locations of the area, relocation route, traffic management arrangements, disruption to port operations and surrounding hazards. From the feasibility studies both O’Brien and ABP agreed on a favourable work area.

The method of relocation selected was to use Self-Propelled Modular Transporters and Specialist transport beams, specifically designed for the relocation of STS cranes. These beams were utilised to support the load of C2 across the SPMT’s during the lifting and relocation. Due to the age of crane C2 relatively little structural information was available which meant significant investigation was required to safely plan the relocation and disposal. Working in collaboration with the cranes manufacturer, O’Brien Specialist Crane Services were able to verify locations of suitable strength by which C2 could be lifted, this was done by creating small viewing windows around the portal structure to allow engineers to ascertain detailed information about the internal makeup of crane C2. The next stage was to determine an accurate weight and centre of gravity of crane C2 so that the transport arrangement could be designed to ensure maximum stability throughout the relocation. 8, 100ton hydraulic jacks fitted with load cells were used to lift crane C2 off of its rails, the readings from the load cells was then imputed in to specialist computer software which analysed the data to produce a 3D centre of gravity.

From the above information a tailored SPMT transport arrangement was designed which utilised 24 axle lines and 2, 18m 300te capacity steel transport beams. Bespoke lifting brackets were designed, fabricated and installed to the sill beams of the crane structure from which C2 was lifted by the SPMT’s. To ensure the loads applied during the relocation operation were within acceptable limits, significant structural engineering reviews were undertaken to determine the load capacity of the quay structure along the transport route.

ABP identified a small 12 hour window in shipping movements in which the relocation could take place. To ensure the operation was completed as efficiently as possible all preparation works were carried out in the days leading up to the relocation, this enabled the O’Brien Specialist Crane Services team to complete the relocation of STS C2 in a record time of less than 4 hours.

Following the relocation to the disposal area it was critical that crane C2 was removed in the shortest time frame possible so that the operational area could be handed back the client for use in the next stages of Project Pilgrim.

The method of disposal chosen was a piecemeal dismantling operation utilising mobile cranes, this was a favourable method on this project for a number of reasons which included the extremely limited working area and the close proximity of operational assets. Due to the constraints on working area, crane C2 was effectively dismantled within its own footprint.

Due to the unique design of this Liebherr STS crane, it was not possible to carry out a traditional top down piecemeal dismantling operation and as a result an innovative method was required. The O’Brien Specialist Crane Services team came up with a piecemeal dismantling operation which worked in the opposite way to a traditional dismantle, this was to work in a bottom up manner. Our structural engineers undertook detailed modelling of the structure to determine accurate weights of each lift, whilst simultaneously determining the cranes overall stability during and after each lift. Detailed crane lift studies were developed and approved for each crane lift operation. Following the parameters of detailed engineered lift studies the structure was then progressively dismantled following an engineered sequence which ensured the structural stability of the crane at all times. This cutting edge method allowed crane C2 to be dismantled in the safest possible way whilst taking a duration of just two working shifts.

The project featured many risks including working at heights, objects falling from heights, operation of heavy plant, working in a live port, and working over/near water. However, the project was seamlessly completed to the total satisfaction of Associated British Ports and other key stakeholders, with zero health, safety or environmental incidents.