The Matson Terminal, Honolulu is a vital part of the Hawaiian economy and acts as a shipping hub between Mainland USA to the Hawaiian Islands and the Pacific Rim to the Far East. The local population rely heavily on the Honolulu Harbour operation for the import of 85% of the food consumed on the islands, this makes up a large proportion of the more than 640,000 TEU’s delivered to Hawaii annually. 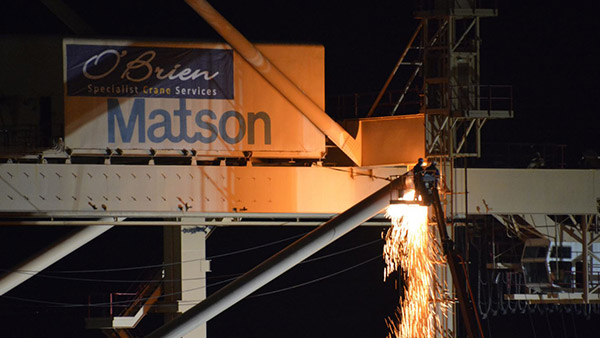 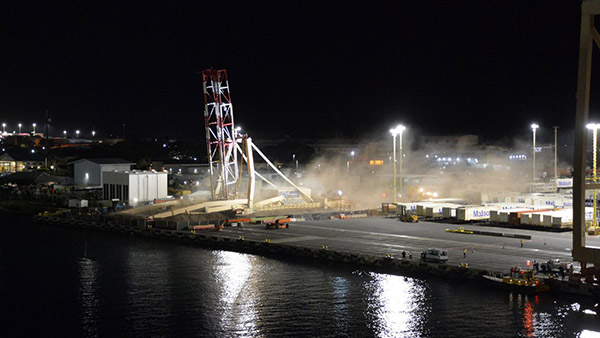 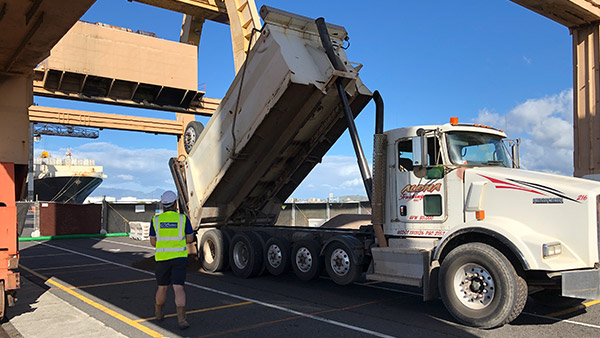 In conjunction with the State of Hawaii’s Harbours Modernisation Program, Matson’s are investing $60 million in a multi-year terminal expansion and modernisation project for its Sand Island hub. The project involved the delivery of three brand new STS Cranes, the upgrade and overhaul of three existing STS cranes and the demolition and removal of four redundant STS cranes.
O’Brien Specialist Crane Services were approached by PACECO CORP & Matson Terminals and were tasked to develop a proposal and method for the disposal of the four redundant STS cranes, the key requirements were that the method; 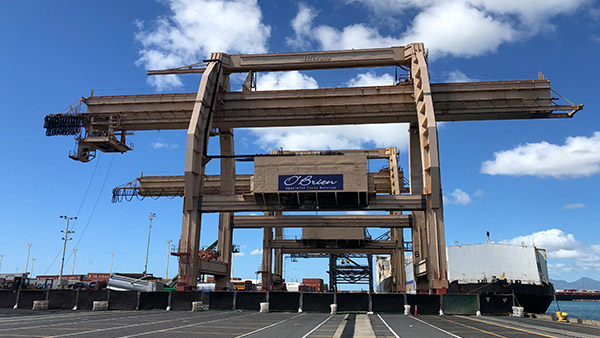 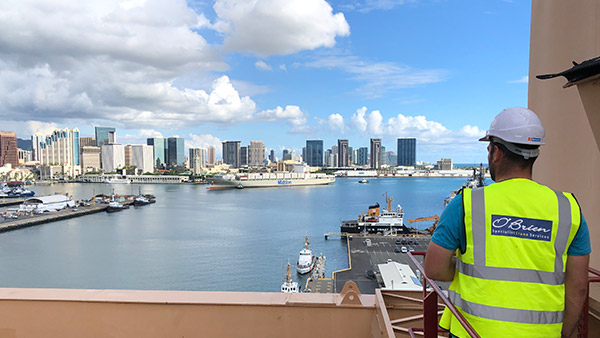 The O’Brien Specialist Crane Services proposal centred on the demolition method of controlled collapse which involves weakening the crane structure at specific locations to induce pin/hinge joint points about which the structure can fold and collapse to the ground in a controlled manner. This method was chosen as it meets and exceeds the key requirements of the project.

A detailed environmental impact survey was conducted which found that the two older Alliance shuttle boom cranes were coated in a lead based paint, this was of great concern to the DOH as the miss management of this substance could have a catastrophic impact on the delicate Hawaiian ecosystem. From the impact survey a comprehensive environmental protection plan was developed which set out the strict control measures required to ensure our operation had no adverse impact on the environment. These controls included, along with many others, the lead abatement of the structural steel in the locations were cuts would be made as part of the controlled collapse and the total removal of hazardous materials such as oils, lubricants, fuels, PCB’s and fluorescent tubes, prior to the demolition of the cranes. To further aid the sustainability of the project all recyclable materials were shipped to the mainland for treatment so they can be reused and repurposed.

Due to the age and condition of the quay structure the prevention of damage during the demolition was of the utmost importance, with this in mind the DOT imposed a ground bearing limit of 4.5te/m2 in the demolition area. To meet this extremely low ground bearing restriction O’Brien Specialist Crane Services carried out various ground impact calculations and from these developed a quay deck protection mat which would absorb the impact of the controlled collapse of the 1,200te, 75 metre tall structure. The impact calculations and protection mat design were checked and approved by the two independent engineering consultants prior to the demolition.

As a result of the intense port activity supplying critical items to the Hawaiian Islands, is was imperative that any demolition method would not disrupt the daily operation of the port. A controlled collapse method would allow the port to operate as normal throughout the project with minimal requirement to tie up any valuable quay edge space. To further reduce the risk of disruption Matson’s, working with the Department of Transportation Harbour Division, identified a small window where no ships would be moving around the harbour in which time the controlled collapse of each crane could take place. This window of opportunity was only possible during the night once a week and for a duration of 4 hours only which meant that the demolition operation needed to be as efficient as possible. During the planning stages of the project the decision was taken that each of the STS cranes would be demolished, cut up and removed from the port individually before moving onto the next, this allowed the demolition area to remain as small as possible and therefore not interfere with port operations.

The four cranes which were demolished were of two very different designs; two of the cranes, manufactured by Alliance, were a shuttle boom designs. Whereas the other two cranes manufactured by PACECO were a more traditional STS Quay crane design with an outreaching cantilever gantry. The PACECO cranes had previously been extended up over, and as a result there had been a number of additional bracing components installed within the portal structure. This posed an additional challenge to the O’Brien engineers to determine a solution to deal with the additional bracing. The solution was to install temporary restraints to control the bracing during the collapse.

The O’Brien Specialist Crane Services site team safely carried out the demolition of all four STS cranes in strict accordance with the requirements of the Department of Health – Office of Environmental Quality Control and the Department of Transportation – Harbour Division, to the total satisfaction of our client.