O’Brien Specialist Crane Services was called out to a dockside crane which had sustained irreparable damage due to structural failure. The crane, which had been operating in the shipyard for many decades, suffered a catastrophic failure of the main A-Frame. This led to the entire boom section collapsing into the bottom of a dry dock, narrowly missing a ship berthed in the dock. The boom came to rest in a very precarious position against the dock wall still attached to the main superstructure of the crane. 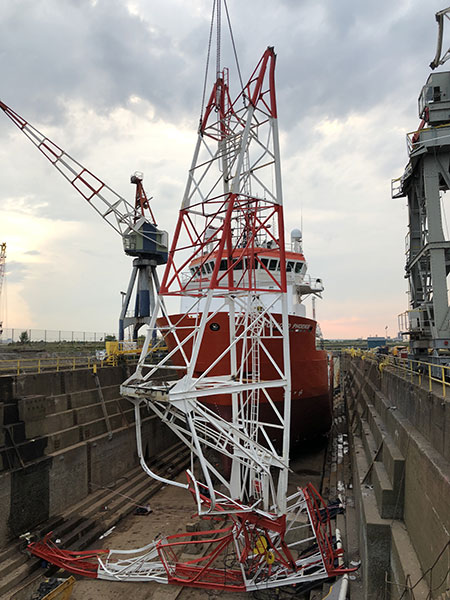 O’Brien Specialist Crane Services responded as quickly as possible to make the crane structure and surrounding area safe. The same day, our Disaster Emergency Response Team was on-site to formulate a solution to make the crane safe.

There were several challenges: the crane itself was on a narrow pier between two dry docks meaning there was very little width available to rig a mobile crane. This in turn limited the size and capacity of the mobile crane. Our heavy-lift specialists opted for a 350ton mobile crane with a variable outrigger base which allowed the crane to be rigged and operated within this small area. The next challenge was the unbalanced weight the dockside crane had once the boom was totally removed, as the main ballast box was outside the footprint of the cranes base. This caused great concern that the structure could become unstable and topple once the boom was removed. There was also concern regarding the slew ring and stresses that would be placed on it due to the unbalanced weight.

Following a meeting with the client, the HSE, and the insurance investigator, it was agreed that O’Brien’s Specialist Crane Services engineering team would conduct a full structural survey of the crane to determine the best course of action. As a result of the survey, we decided that two separate temporary bracing systems were required, one to support the revolving superstructure from the cranes pedestal, thus removing any stress from the slew ring, the second to add additional counterweights to the pedestal of the crane ensuring that the centre of gravity remained well within the footprint of the crane base. The team engineered and installed both temporary systems on the same day as the incident ensuring the structure was safe and posed no risk of causing further damage.

The following day the team returned with a heavy-lift crane to remove the boom section. Due to the restrictions in the cranes capacities, and the precarious position & shape of the boom, it was decided that the boom would be removed in two sections. The first section was against the sidewall of the dock and still attached to the crane. The 20 ton section was lifted free in a vertical position requiring it to be “topped and tailed” once it was lifted out the dock. The second section was smaller at 15 ton and was at rest in a horizontal position. This allowed for relatively straight forward lifting. Both sections were placed in a laydown area to be examined as part of the ongoing investigation into the cause of the incident, the remaining structure was also left for inspection as part of the investigation. 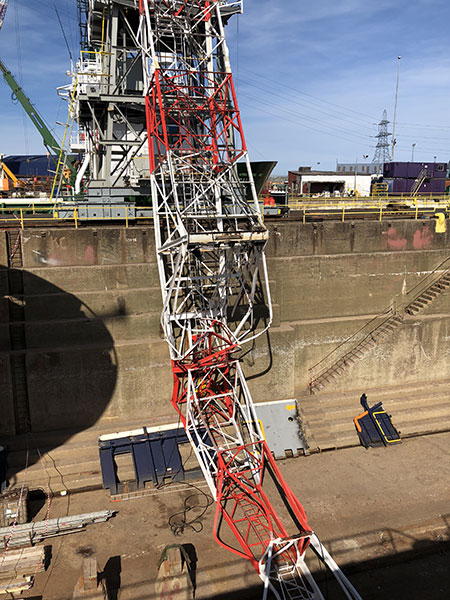 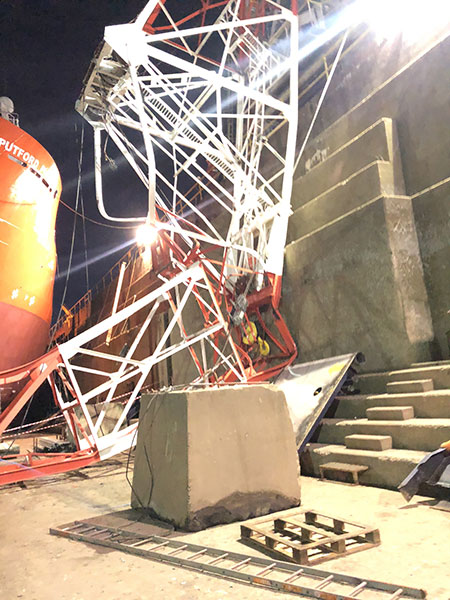