The disposal of redundant equipment at the Port of Felixstowe

Over the past 7 years O’Brien’s has worked in partnership with Hutchison Ports to dispose of redundant assets from the Port of Felixstowe. 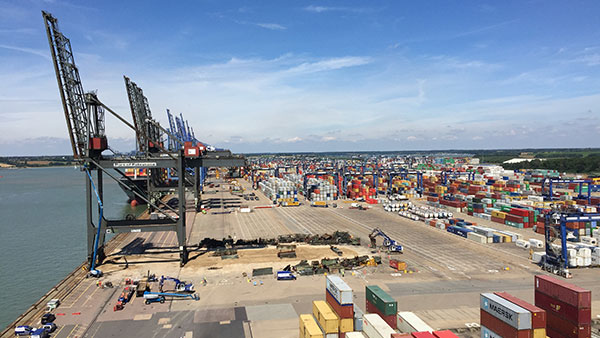 As the busiest port in Britain, the port of Felixstowe is Hutchison Ports flagship container terminal in the UK. To maintain its status as ‘The Port of Britain’ HPH must continually upgrade and renew its fleet of quay and yard cranes. To make way for the largest, most advanced and most efficient cranes, the older, smaller and obsolete cranes must be removed.

After a competitive tender process O’Brien’s were awarded the contract for the removal of the redundant assets thanks to a comprehensive disposal package tailored to the needs of HPH. The package consisted of a highly efficient demolition method which minimised disruption to terminal operations keeping the port working at full capacity. This method also helped keep costs down allowing O’Brien’s to offer a credit to Hutchison Ports for the value of the scrap metal. 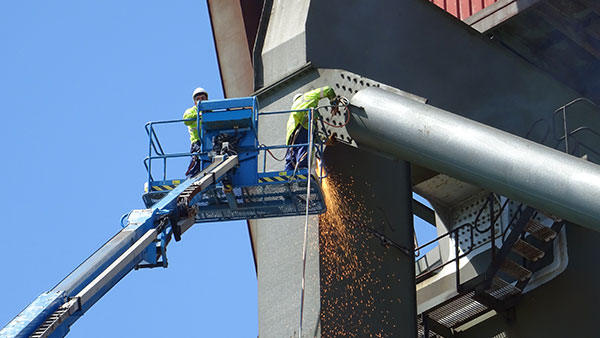 Working on all three terminals within the Port of Felixstowe, Landguard, Dooley and Trinity, the STS cranes were collapsed in their current locations and then cut into large sections to be transported to a designated recycling area within the port, Within 10 hours of each collapse the crane rails were cleared of all steel and protection material allowing the port to operate other cranes on that section of quay. This reduced disruption to an absolute minimum. Within five days of each collapse, the demolition drop zone was handed back the HPH with no damage. During each collapse sand and steel protection was used to absorb the impact of the collapse to ensure no damage was sustained to the quay deck. Prior to any of the cranes being collapsed all oils were drained from the gearboxes to ensure there was no risk of spillage during the demolition or processing. Each of the cranes were of different makes and models meaning each structure was of different design, size and weight. The biggest of the cranes stood at a height of 105 metres, O’Brien’s surveyed each crane separately and designed a unique pre-weakening operation for each of the nine cranes which ensured total safety during each collapse. 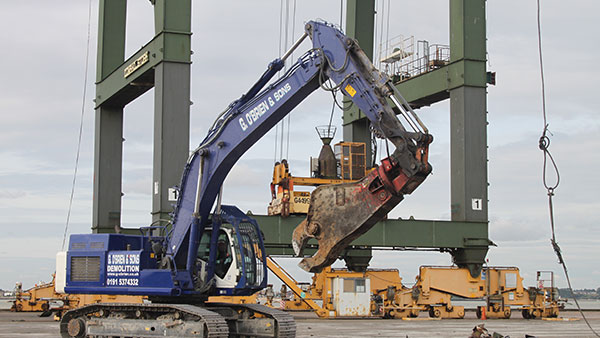 As part of the ongoing upgrades within the port a new railway terminal was built with new more advanced cranes. This rendered two of the old RMG cranes redundant, however, the railway which they spanned was very much still live as this formed part of the mainline feeding the new terminal with 66 daily arrivals and departures. Due to this, severe time constraints were put in place and the port allocated two 12 hour weekend rail closures in which to carry out the works. As part of the works, a temporary bracing system was installed to ensure the stability of the crane structure throughout the dismantling operation. This needed to be installed and removed within the 12-hour rail closures. The O’Brien’s team completed the dismantling works ahead of schedule allowing the rail line to be handed back to the client earlier than expected.