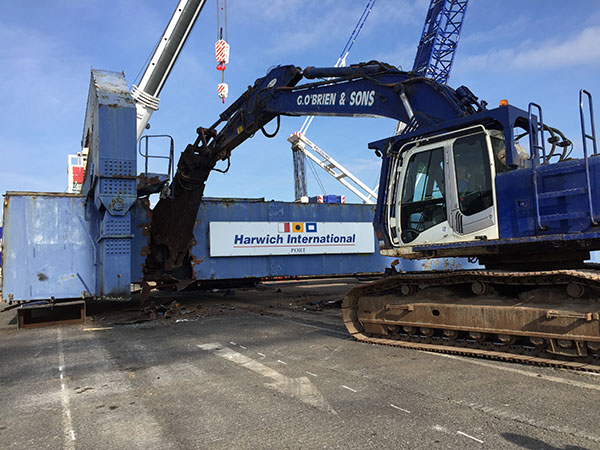 The STS crane was designed and built by UK based crane manufacturer Stothert & Pitt Ltd. to the specifications of British Rail. It was built for its Parkeston Quay at Harwich in 1966. Having been the pioneer of container shipping in the UK, British Rail commissioned the Bath based engineering company to design one of the first specialist cranes specifically for loading and unloading containers. After 50 years of service the current owners and operators decided to scrap the ageing crane to make way for new more efficient machinery to service bulk cargo ships.

O’Brien’s was selected to dismantle and remove the crane from the port. After structural analysis, it was apparent that the old quay wall and deck were in a poor state of repair, which ruled out a controlled collapse for this project. It was also determined that the quay could only take a loading of 4.5 ton m². This ruled out a traditional dismantling operation. The solution, devised by our team, was to lift the entire crane using four heavy-lift mobile cranes, one at each corner. Once lifted, sections would be removed from the bottom, working up, and lowering the crane each time a section was removed. This continued until the main beam of the crane was resting at ground level. Four mobile cranes were used to spread the weight over a large area to reduce the loads imposed on the quay. Even with this, the ground loadings were still above the permitted levels so we had to use wooden spreader mats “ekki mats” to further spread the outrigger loads. In total, four artic lorry loads of ekki mats were used.
The mobile cranes used during the lift were some of the biggest in the UK, the cranes were: 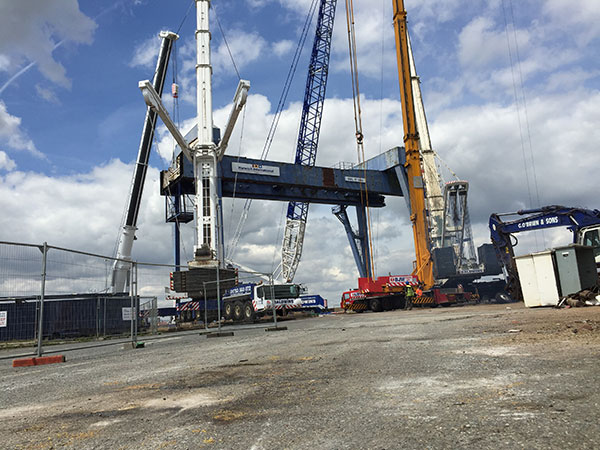